On Friday 18 August 2017, College staff gathered to celebrate Roger Davidson’s 94th birthday.  All are continually inspired by Dr Davidson and his energy and commitment to the College.  Dr Davidson volunteers in the College’s Archive four days per week and has been instrumental in the establishment of the Positions and Achievements database.  Wishing Dr Davidson a very happy 94th year.

Please see below the article written by the College’s Archivist about Dr Davidson’s being awarded a 2017 Order of Australia Medal.

Readers will be delighted to learn that one of the most loved and respected members of the Newington community, Dr Roger Davidson (ON 1940), was awarded the Medal of the Order of Australia (OAM) in the Queen’s Birthday Honours List. Roger was honoured ‘For service to medicine, to education, and to the community.’

Roger has been a part of Newington life since he entered the College aged nine in 1932. At school he was a fine scholar, a keen cricketer and an active participant in the College’s musical life, Cadets and production of The Newingtonian, and served as a Probationer Prefect. His son Timothy attended the College from 1963 to 1972.

Roger’s Newington connections in adult life have been characterised by selfless service in many forms. A GP with a local practice, he served for more than thirty years as the College’s honorary medical officer, treating both Boarders and Day Boys when needed and establishing and operating the Saturday Sport Clinic. He served as a member of the College Council for twenty-five years and as its Honorary Secretary and Executive member for over twenty. He has served at different times as President of the Old Newingtonians’ Union, chairman of the 70 Club and office holder in Lodge Wyvern. Most recently he has led the team of volunteers working with the College’s archives, contributing a huge amount of time and effort to the task. Among other things he has entered over 119 000 entries in our past student positions and achievements database! Thinking of Newington’s future as well as its past, he became a founding member of the Founders Society, the College’s bequest group, in 2010.

Roger’s experience and meticulous records in the Saturday Sports Clinic provided the basis for a pioneering study of schoolboy rugby injuries, published in a series of articles in medical journals. The results led to important changes at the national level which improved the management of such injuries, resulting in undoubted health benefits for thousands of young players. His service to medicine in the broader community during his long medical career included honorary surgeon/medical officer and other roles at Marrickville District Hospital, Eversleigh Hospital, Royal Hospital for Women, Braeside Private Hospital (now a part of the Wyvern House campus), and the Salvation Army and its Bethesda Maternity Hospital.

For many years, Roger has put his musical talents (he is an accomplished cellist and pianist) to good use in community service by playing the piano and leading singing for patients in the dementia ward at the Concord Community Hostel aged care facility. This is more than just ‘helping out’: it reflects his understanding, as a former general practitioner, of the importance of regular activity and mental stimulus for elderly people in declining health. His service to the community has included service on the Council of the Family Life Movement of Australia and as a member of the Newtown Rotary Club.

Roger has received a number of awards over the years for his specific services for the Salvation Army, for sports medicine and for volunteer leadership. In 2008 he received Newington’s highest honour for its alumni, the Newington Medal, recognising the full range of his contributions to the Newington community and in the broader community over so many years. Now he is rightly recognised through the Medal of the Order of Australia. If you see him about the College, please feel free to congratulate him. 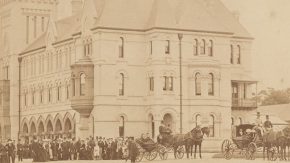 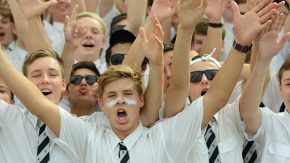