“I’m fascinated by everything I see around me. I like to have a go, interpret how I see things, because if you don’t try, you’ll never know.” – Michel Tuffery.

In Term 3, Newington College welcomed Michel Tuffery, a multi-disciplinary artist from New Zealand who was the guest of honour at the annual HSC Visual Arts Showcase Exhibition.

Michel’s artistic practice is one that is both experimental and universal. His works explore concepts which question the role of the artist, the audience and the function of art itself across a range of mediums from printmaking, drawing, painting, sculpture, video and audio installation. Rather than working within set boundaries, Michel’s works are an endless search for new questions and possibilities and it is Michel’s modus operandi that informs the title of this year’s HSC Final Works exhibition –  Manouevre.

This year, works from three Year 12 HSC classes were exhibited. The boys have been working on their bodies of works since Term 4, 2014 and the exhibition displayed is not only shows the end product, but the various material and conceptual stages that have led to the production of the final work. Drawing inspiration from school, sport, music, aviation, the human psyche, and philosophy, students have experimented with a diverse range of materials to express what art means to them.

Michel Tuffery believes in experiencing artmaking and the gallery space as a ‘mental break’ from the real world and during his address to the audience at the Opening encouraged visitors to allow themselves time away from everyday life by going to see art.

With this in mind, this year’s gallery space was deliberately curated to demonstrate Michel’s thinking. The Year 12s constructed a space that was energetic yet meditative at the same time. A place that promotes open mindedness and creative thinking. While the works themselves are stationary in their physicality, the reasoning, interaction and feelings that have led to their creation pulsate through the gallery.

A big thank you to Mr Thompson, Mr Pawley, Ms Chapman and Ms Deng for their commitment to the boys this year and for their tireless work on the edition. An additional thank you goes to Ms Sabine Tanase for her ongoing support of the boys and their ideas. None of this could have happened of course without the help of the Newington College Design and Technology department, so thank you to Mr Burgess and Mr Yates for their expertise. 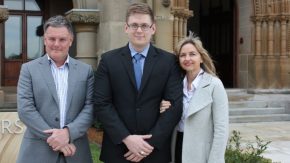 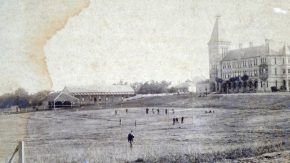