On Tuesday 26 March, Newington College held its annual Year 7 Mother and Son Dinner with more than 340 year 7 students, mums and teachers in attendance. It is a night where the bond between mother and son is celebrated and valued. The event was held at Le Montage in Lilyfield and was a great success with exceptional food and fabulous service. The night began with canapés on the terrace overlooking Iron Cove Bay.

It was a very special night with many memorable moments. The boys acted like true young gentlemen: introducing their mothers to their friends; following the etiquette of a formal dinner; and inviting their mums for a slow dance on the dance floor.

The Year 7 Mother and Son dinner is also a great opportunity for parents to meet the boys and mothers in their son’s mentor group providing a lovely opportunity for connections to be made.

The guests of honour for the evening were Deputy Senior Prefect Jack Walker (12/KL) and his mother, Maryann Walker. It was particularly fitting this year to have Ted Walker (7/KL) in year 7, listening attentively to his big brother who spoke so beautifully to the boys about the important bond between mother and son and how it should be appreciated and celebrated. There were not many dry eyes in the room by the end of his talk.

The evening was made particularly special with the presence of Colleen Scalone, and all the Year 7 mentors who gave up their time to be with the year 7 mothers and sons. Colleen deserves special thanks for all her behind-the-scenes management and her particularly her trivia quiz which was hotly contested on the night.

The event was hosted by New Women, a support group of the Newington P&F, and was only possible with the work of a team of volunteers led by Kathy Walsh and Christina Cleaver. More than $2,500 was raised through a raffle on the night and all proceeds will go to the ELC/Crèche at Macleay Vocational College. The raffle prizes were kindly donated by Midford ($500 worth of uniform vouchers). 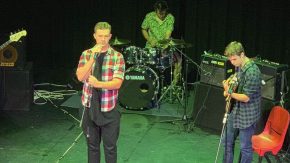