My tour to Japan with my Lindfield Junior U12 Rugby Team last weekend provided me with really big insights into rugby in Japan and its culture.  The tour involved us playing two rugby tournaments against a New Zealand Team and 14 Japanese Teams, as well as attending the Bledisloe Cup Test in Yokohama.

Rugby in Japan is a lot more respectful than in Australia!  For instance, before and after every game you line up as a team in a row and bow and say “Arigatōgo” which means “thank you”.  It amazed me how enthusiastic the supporters and Japanese officials were, before, during and after the tournaments.  It made me realise just how passionate the Japanese are about their rugby.

The tour, however, was not only about rugby.

On the days when we were not playing rugby we attended classes at the boarding school where we were staying.  We participated in English lessons with Japanese students of our age and learnt a number of everyday Japanese words. We also learnt the basic skills of Kendo (Japanese sword fighting) which was really awesome and some simple Japanese writing (calligraphy).

We also attended two noodle museums in Yokamama.  The first was a museum all about the history and making of instant noodles.  We were allowed to design our own Noodle Cup and select our noodle toppings to take away with us.  Mine was so yummy!  The other museum was a ramen noodle museum.  It was set in the late 1940’s to look like Tokyo post World War II. It was fascinating looking at all the old buildings and learning about the history of ramen noodles and how they have not really changed since they were first developed.

One of the things that astounded me about Tokyo was just how clean and tidy it was.  I didn’t see one piece of rubbish on the streets!  I was surprised after the Bledisloe Cup Test when all the Japanese who attended the match took their rubbish with them and placed it in the big bins outside the stadium.  Us Aussies could learn from this!

I have developed a real appreciation for the culture of Japan and look forward to learning more when I go back next year to watch some of the Rugby World Cup matches with my Dad.  Can’t wait! 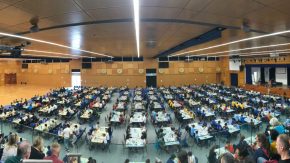