A Message from Mr Holden

I have been pleased by the way Wyvern students have settled into the new academic year. After the summer break it seems that boys were more than ready to get back into school routines. It is equally pleasing to see the good relationships our teachers are forming with their classes. Positive, caring and respectful relationships between students and staff are a prerequisite for learning to take place. I am greatly encouraged by the foundations laid so far in this regard.

Extra-curricular clubs and music ensembles have started this week and it is very encouraging to see so many students taking up these additional learning opportunities outside of the normal school day. A quick reminder and request for prompt pickup of your sons at the conclusion of any afterschool club/activity.

We are very blessed to have such a supportive and proactive parent body. The P&F have already played an important role this year by assisting new families to Wyvern with our parent mentor scheme and by holding the “Welcome” picnic prior to the term starting. Tomorrow evening we look forward to the P&F Cocktail Party to be held  at Wyvern from 6:00pm. I thank Mr Mick Cronin, P&F President, and his excellent executive team for organising this event. Can I respectfully request that great consideration is given to our neighbours when parking; please be especially mindful not to block driveways. We will have some parking availability in the Wyvern and ELC carparks on a first come, first served basis.

Boys who are receiving a Gold Certificate will be presented with them at lines on Monday February 11th. Gold Certificates are awarded to students who complete four PRC challenges. Please recognise and congratulate the following boys on their Gold achievement:

“Blessed is the one who perseveres under trial because, having stood the test, that person will receive the crown of life that the Lord has promised to those who love him.”

Many of you will know that I love all sorts of sports, so to begin Faith Matters this year, I though we’d look at some stories from the world of sports and relate them to matters of faith!

You probably haven’t heard of basketballer Andre Ingram. Last year, his incredible story of perseverance inspired many. Andre spent more than a decade in the NBA’s various developmental leagues — most recently known as the G League. He was so close to the top league for so many years but was never able to make an NBA team. Finally, on April 9 last year at the age of 32, Andre made an appearance in an official NBA game with the Los Angeles Lakers, remarkably making 4 3-pointers and scoring 19 points. He was the oldest NBA rookie since 1964.

The performance on debut and his determination in the development leagues remind me of God’s call on us to be people of perseverance. Through disappointment, rejection, or even feeling invisible, God promises his goodness to those who persevere. It seems to me that Andre Ingram would have felt all of those things. He may never be remembered as a ‘great’ in the basketball world, but he will be remembered as the guy who devoted himself, and never gave up.

It was a heart-warming and emotional welcome for new Kindergarten boys and their families at Wyvern Preparatory on Tuesday 29 January.

We extend our welcome and best wishes to all Wyvern families for a happy and rewarding 2019! To view all photos please click on the image.

Wyvern’s Before and After School Care Program is run by OSHClub. Enrolment for all students is recommended and allows parents to easily manage their before and after school care needs via an online account. Visit www.oshclub.com.au to use the free enrolment service.

The Wyvern P&F are happy to announce that the Uniform Shop is now Online!

All orders should now be placed via the website or in-store, as email and phone orders can no longer be processed.

Some points to note: 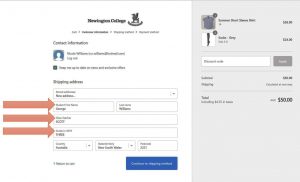 If you have any questions – please contact me via email.

Welcome to another exciting year at Wyvern Library. The boys are off to a flying start with their reading, with 1169 books loaned from the beginning of the school year. Reading Challenges logs will be distributed to boys over the next two weeks so that books read since the beginning of the school year can be recorded. As you may remember, 469 Reading Challenges were completed by the boys 2018 so we are hoping to continue the strong engagement the boys of Wyvern have with reading again this year. With this in mind, it is imperative that all boys bring their Library bag to school to borrow on their lesson day. Boys who are reading books from their home library should bring these books to school on Library day. This gives us the opportunity to see what your son is reading so that suitable recommendations of similar reading materials can be made for him from Wyvern Library.