A Weather of Signs

A Weather of Signs

“A Weather of Signs”

“Dwyer makes her artworks for the locations they inhabit, and the interplay of object, space and architecture is vital to the experience of her work” – Wayne Tunicliffe

To my delight I’ve been most moved by the presence of the flag artwork from inside the Le Couteur building, teaching Visual Arts students in the art classrooms and looking out through the tall, ex-boarding house windows. In those quick moments, there is a belonging I feel. Students and I, staff and I, we are here to and learn and understand. We have been given a space to exercise our most creative teaching so the boys can excel in their most creative endeavours.

The Flag for me is a visual affirmation that creativity flies here at Newington College too.

In early 2016 Mikala Dwyer took up the New Women Residency and along with her own artmaking, guided students through a collaborative project. The brief for students was to select a shape. This selection would be painted onto a 15-meter roll of canvas, the same proportion as their own body. The task spoke to the aspect of Dwyer’s practice that envelopes the surrounding conditions and relationships into the work. Boys had to negotiate the shared canvas space with their peers, who they were working alongside. These large-scale, hard-edged paintings, came to signify the students mapping their own artmaking. The painting installations were initially installed in an exhibition called Speak for Themselves. The title was a quote from Dwyer about her art processes, allowing the material qualities to speak for themselves in the shaping of an artwork. It also seemed to capture what the boys succeeded in doing, an articulation of their own creativity, their own visual language. Later that year Dwyer was commissioned to create a public artwork for Newington College school campus, near the entry to the school, to celebrate both the new Drama Centre as well as the other creative learning that takes place on the College grounds. She was asked due to her expertise in public art and her understanding of the what is unique about, not just Newington College, but the students that embody it.

Dwyer suggested that the commission be a combination of both students’ work and hers. The collection includes five student flag designs and one Dwyer flag design, which will rotate throughout the school terms.

Dwyer had previously been in residence and chose a mode of operation that encouraged the boys to take risks and pursue unfamiliar ideas. Impressed and inspired by the way Newington College boys demonstrated inventiveness and creativity, she suggested a flag that represents their creativity among other characteristics acknowledged in the school grounds.

True to her reputation Dwyer allowed all the associations of a flag and its pole to be woven into the glorious flag designs. She animates this structure and empowers the students with what it represents. The title “A Weather of Signs” employs Dwyer’s inventive approach in the hope that students can look to an object with a presence and function to honour the inventiveness and efforts of the body of creative students. In a pristine campus, verdant with possibility and manicured for commitment, the flag serves to remind students to discover what’s possible through Drama, Visual Art and Music as well.

It is with the generous support of the Creative Arts Association that this important artwork was made possible. We are sincerely appreciative of their values, action and insight into the creative needs of Newington College students. 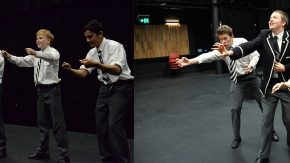 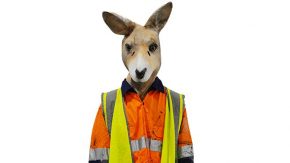