This year Newington has initiated a unique venture to acquire artists works. These can be works that are already in another collection and on loan to the college or from our acquisition policy with the Concordia Gallery.

Dr Richard Goodwin has lent the school his award-winning work Caraspace and has also agreed to be part of the inaugural advisory board for Newingtons Concordia gallery.

With oover 30 years of practice as an internationally exhibiting artist and architect, Goodwin has sustained a prolific and professional practice of art and architecture. His work ranges from freeway infrastructure to the gallery to “parasitic” architecture / public artworks. Fundamental to his work and philosophyis—the notion of adaptive re-use and radical transformations.

Goodwin established the Porosity Studio 1996 at the College of Fine Arts (UNSW) where he currently holds the position of professor. The studio enquires into a dynamic understanding of art, architecture and urban design: that the movement of people through the built environment and their patterns of inhabitation constitutes a politically rich layer of architecture. Since 2004 the studios were run as intensive, international, multi-disciplinary workshops and have been recognised and supported internationally by various universities and institutions such as the British Council.

In 2002 Goodwin was awarded the prestigious Discovery Grant from the Australian Research Council (ARC). This body of research, Porosity, has been widely published and exhibited in galleries across Sydney and has begun to influence the way designers, architects, artists and even emergency services view the city fabric. In 2009 the ARC awarded Richard Goodwin a Linkage Grant to develop Porosity using real-time technologies and gaming engines in collaboration with UNSW architecture academic, Russell Lowe.

Carapace is a seminal piece of public sculpture for Goodwin’s practice and for the Australian Sculptural canon. The work Carapace is made from a vintage Mercedes car, fiberglass and steel. It stands at 235 x 300 x 500 cm and is a monotone bright white. This was acquired by Sydney University directly after its success as the winner of Sculpture by the Sea in 2003.

The noun Carapace means a shield, test, or shell covering, usually of an animal. The explosive artwork Carapace extends and challenges ideas of sculpture. It both maintains a strong three dimensional, permanent form, and projects the internal car limbs beyond it’s covering. The artwork continues Goodwin’s investigation into the notion of Exoskeleton and habitation within a public park space.

We are extremely proud to have this work installed on the lawn outside the Le Couteur Wing on a three-year loan from Sydney University and hope its will stimulate critical conversations. Is art a discipline to protect ideas of culture? Can art as a secondary subject and academic field provide a material process to test ideas about ideas of truth and beauty? 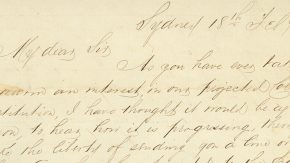 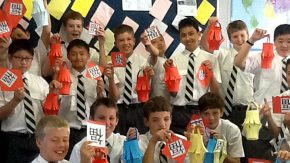