The annual Year 11 Visual Arts Camp was held from Saturday 30 January to Monday 1 February and attended by all 36 boys from the HSC Visual Arts course. Situated in the pristine environs of the Shoalhaven River Valley, the very location Australian Artist Arthur Boyd felt had a profound effect on his thinking and work, our boys spent three days attending a Masterclass and immersed themselves in their own art making.

This year’s program asked boys to investigate representation throughout art history and referenced Philosophers and theorists from Plato to Walter Benjamin. The program was also influenced by this year’s New Artist in Residence Mikala Dwyer. As a contemporary artist, Mikala was able to guide our boys into thinking about the freedom artists have in questioning the meaning of representation.

Working amidst the breathtaking vista of Bundanon Trust, Mikala challenged the boys to look beyond the concrete and literate and think more abstractly about the landscape. She encouraged the boys to experiment with contemporary mark making processes, and so throughout the camp, the boys tried out experimental drawing and printmaking processes to recreate the landscape they were living in. Many said that the biggest challenge they faced was in working with non-recogniseable styles. However it was also with this limitation that they were about to gain the most as many boys found their own visual language through this process.

As always, this year’s camp provided the boys with fresh ideas and approaches towards their own art making. A great way to kick start their HSC journey. A big thank you to Mr Thompson, Ms Chapman and Ms Tanase for their dedication and organisation. 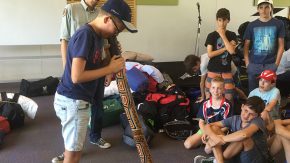 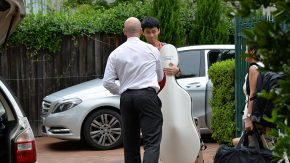