Recently, I played at the World Cadet Chess Championship. I was the official player for Australia in the Under 8 category. This was my first time competing at the most important international junior chess tournament. It was held in Weifang, China this year. Overall, I think it is a very good experience.

I didn’t play as well as I expected, as I only ranked in the middle of all the players, however, I did extremely well in the last round, as I beat a strong player. I enjoyed this tournament for many different reasons. Firstly I had the opportunity to play with many different people from around the world. For example, Haoze from China, Nathan from Ireland, Lukas from Lithuania, Ishaan from India, Khoi from Canada, Duc from Vietnam and Daniel from the United States. Also, by playing every day for two weeks meant that I improved my chess skills. For example, I became a tiny bit better at using pawns in a position. To top it off, we got to see peacocks during the excursion day! I really enjoyed this special tournament! I will work harder in the future and want to represent Australia to compete again! 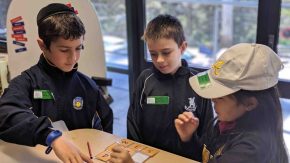