On Thursday 23 May, Newington hosted the annual Classics Dinner for Senior students of Latin and Classical Greek. The dinner was attended by well over 100 students, accompanied by their teachers from many of Sydney’s schools. Many of the students dressed up for the evening in costumes depicting tragic heroines, heroes, Greek and Roman gods and even a set of Latin text books!

Our very own caterers prepared a sumptuous Greek feast for the event, which included taramasalata, roast garlic lamb shoulder, pasticcio, souvlaki,baklava and a whole host of Hellenic treats.

Students mixed freely with one another and after sharing the food, listened to Bradley Smith (ON 2011) speak about his own classical education  at the school, and how it has helped him in his own profession in the law as he prepares to take the bar exams for becoming a barrister.

After this, the students competed in the quiz for the Greek pots on offer as prizes. There was great merriment and whoops of delight in the hall as the winners were announced and all that remained was to judge the fancy dress competition. The first prize was awarded to a school with a tableau presenting Dido on her funeral pyre, many of the girls dressed up as tree logs!

Thanks must go to Miss Triantafyllou for her organisation and Bea Standen and her staff for the exceptional job they did with the catering. 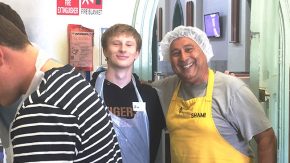 Previous Article A lesson for Le Couteur: Valuing hard work for the sake of others 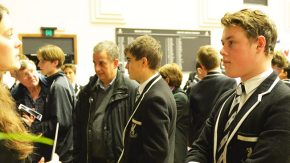