It is with sadness that we write of the passing of Mr Ian (Masher) McLean.  Newington’s former Sportsmaster, Mathematics Teacher and Honorary ONU Life Member, Ian’s life was celebrated on the College grounds on Thursday 3 August 2017. A full obiturary will appear in the Spring edition of NEWS Magazine and the next edition of ONU E News.

As a start to a busy ONU and Newington weekend, 24 members of the Class of 1953 gathered on Friday 28 July, at the historic Castlereagh Boutique Hotel (formerly the NSW Masonic Club) for a reunion lunch.

Organised by Lt Col (Ret) John Moore AM (ON 1953), those that attended enjoyed a wonderful three hours of catching up and reminiscing of their times at Newington some 64 years ago. The College’s Director of Community and Development Rod Bosman (ON 1978) was invited to give an update on the College. Rod was very pleased to be there as it was one of the rare occasions these days when he is the youngest in the room.

The Class of 1953 are very strong supporters of the College as evidenced by the names around the table that would be familiar to many. Apart from John Moore, who generously provides his expert commentary at our annual Anzac Day Service, the year also boasts former Council Chairman Hon. Angus Talbot, current 70 Club Chairman Gilbert Morgan and Treasurer Warren Green, to name a few.

One who could not make it on the day was Jim Box from Orange, however, he recently supplied to the College Archives a number of photos, copies of which were circulated amongst the lunch attendees to much interest and amusement.

As one would appreciate, a number of the year have passed on and those present honoured their missing mates from Brian McMillan who died in December 1953 through to the most recent passing, being John Field in July 2017.

Many of the year backed up on Saturday for Back to Newington Day and they are always welcome to the College at any time. (see above photo)

The College looks forward to welcoming back the Class of 1967 for the 50 Year Reunion on Saturday 28 October 2017. A tour of the College will commence at 4:45pm, drinks served at 5:30pm and dinner at 6pm.

A Save the Date for the Class of 1972 has been sent for their 45 Year Reunion on Saturday 11 November 2017 at 6pm.  Further details will be with you shortly.

We have started to plan our International Reunions calendar for 2018 with the following proposed and to be confirmed:

Dr David Mulford will be attending the Singapore reunion and is hoping to attend the San Francisco and New York reunions. 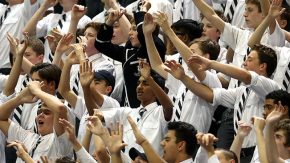 Next Article A Letter From The Headmaster
ShareShareShare