Baseball
Congratulations to Rohan Wood (12/PR) who was a member of the recent NSW All School baseball team that won the National Championships in Victoria earlier this month.

Basketball
The NSW CIS basketball trials were held earlier this week, congratulations to Ben Gill (12/PR) who has made the team for 2019 and Angus Ole (10/PR) selected as a reserve.

Cycling
Hugh Harvey (9/MA) has recently competed in a series of cycling events in Canberra, in a gruelling weekend of competition which included an individual time trial and a road race. Hugh came away with an overall classification of 3rd, well done Hugh on your achievement.

Diving
Congratulations to Ellis Khu (8/JN) who recently competed in the NSW diving All Schools Championships and placed 1st in his age group. Ellis has been selected to represent NSW in the Diving School Sport Australia Championships in Term 3.

Hockey
Jett Leong (9/ME) was a member of the NSW U15 Hockey team that participated at the recent National Championships. Jett came away with a silver medal after going down to Western Australia in the final 2-1. Congratulations Jett on a wonderful tournament.

Tennis
Eric Tripathi (11/JN) recently placed 5th at the NSW State Age Championships. Eric won six out of seven matches playing in the 16 and under age group. A great achievement for his persistence and hard work in 2019.

Justin Dong (9/MA) has continued his rise as a premier tennis player reaching the final of the 14’s boys singles and 14’s boys doubles at the recent Australian National Titles. Justin competed against the top 32 players from around Australia at the clay court championships in Canberra. He is now ranked inside the top 10 players in Australia for his age and second in NSW. Justin has set his sights on gaining his first points on the world junior rankings.

Rugby Knowledge and Wisdom Required
Each home weekend, Newington hosts 25-30 games of Rugby all requiring a referee. If you are a frustrated ex-player, ex-coach or believe you have the ability to manage a free-flowing game of school boy rugby then we would love to hear from you. All expressions of interest can be forwarded to Mr Rod Bosman rbosman@newington.nsw.edu.au 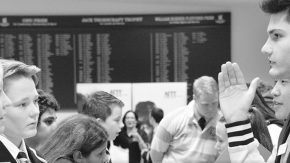 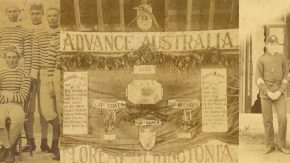 Next Article From 1869: a new exhibition
PrintShareShareShare