To start the mid-year break, a group of year 9 and 10 Newington College students were taken away from their usual routine, to gain a better understanding and appreciation for Indigenous Australian culture. It was an experience that would not only add value to the lives of our students but also to Newington College’s relationship with Macleay Vocational College (MVC).

Day 1
The day began with an early start on Monday, 2 July, the boys of Newington College arrived with a mix of tiredness and excitement. With Mr Dyer in the driver’s seat of the bus, the convoy departed 200 Stanmore Rd at 7:30 am. A stop or two on the drive north and a number of songs from the bus’s resident DJ Ms Troncone was only bettered by the attempts at singing by the group. Once the bags were unloaded and students acquainted with their accommodation in Crescent Head, everyone was back on the road for the quick journey to MVC. Here students were introduced to Mr Mark Morrison, the Principle of MVC, School staff and some Elders of the Dunghutti Nation. Then it was time to get artistic, with the boys introduced to the styles and customs of Indigenous art. A few hours later, each of the boys walked away with their own artwork linked to their own story and an appreciation for Indigenous art.

Day 2
It was an amazing experience for everyone involved. Staff and students were accompanied by two Dunghutti Elders and an MVC staff member to the Willi Willi National Park. A walk through the dense rainforest to a number of waterfalls was complemented with stories and lessons on bush tucker by the elders. Students waded through the icy water along the river bed, eavesdropping on the sounds of birds, running water and gentle rustle from the trees. Whilst Mr Muir had instructed the use of wetsuits, only a few heeded the advice, some even choosing board shorts and a polo shirt for the barmy 4oC water. When everyone was dry, warm and fed it was back to the resort for a well-earned sleep.

Day 3
The day started with a game of touch football on the beach and not even the rain could stop the laughter or competitiveness of the boys, while Mr Dyer’s refereeing was brought into question. After the game, the boys were once again joined by two Elders and explored the beach in search of pipis and worms. Eaten fresh on the beach of Crescent Head, the pipis served as a snack before heading back to the resort for lunch. From here the group visited the Bush Tucker Garden at the Kempsey TAFE. A tour from Elder Barry who set up the park was informative and educational. There were plants to eat (which we did), plants for tea and even a nut from a tree that we learnt can be used as a candle by burning the natural oil, which Indigenous Australians did when moving about at night or even on their canoe when fishing at night. The day finished with a BBQ for the community which had a great turn out. All the boys worked hard to prepare the food and ensure no one went home hungry. Even Mr Fisher, who doesn’t usually eat meat, was exposed to the delicious culinary expertise of the boys from Newington College.

Day 4
It was an early start with the bus packed and loaded ready for departure at 6:30 am. Some tired boys slept, some yearned for the toilet and others simply spent the time reminiscing about what they had just experienced. It was a fantastic trip rich in experience, which took some out of their comfort zone but ultimately allowed all to foster their appreciation for the oldest continuing culture on the planet. 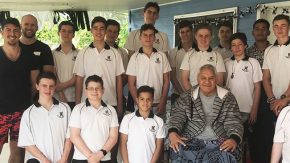 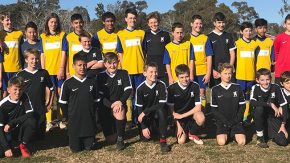