The 2018 Red Centre Service Learning Tour was led by The Head of Service Learning Mr Mick Madden and accompanied by Mr Michael Moonen, Mr Andy Quinnane and Rev Geordie Barham. This was the fourth Service Learning expedition to visit Aboriginal Communities in the desert country of Central Australia. This was a seven-night adventure, camping each night under the spectacular starlit desert skies.

This year’s tour really hit the ground running by flying in direct to Ayers Rock airport. This enabled us to take in the wonders of Uluru after lunch on the first day, just two hours after our arrival. Boys were then able to witness and photograph the breathtaking, changing colours of the Uluru sunset that same evening. The location of our first campsite also enabled us to explore and marvel at the unique conglomerate rock formations at nearby Kata Tjuta (The Olgas) as we went on a two-hour trek along the Valley of the Winds walk.

In our travels, we were also fortunate enough to visit both Kings Canyon, the Ormiston George and camp out on the ancient Fink Riverbed. The boys were in awe of the colours and sheer majesty of these quite remarkable landscapes. Their photos taken were full of colour and amazing contrasts with the rich red earth set against the uninterrupted, endless clear blue skies.

As in past years, we were again fortunate enough to spend two nights camping on a remote property owned by one of our tour guides, John Liddle, who is a traditional aboriginal landowner. Upon arrival, the boys experienced a traditional welcome to land, complete with a smoking ceremony led by Aunty Bessie Liddle, who is a significant Elder in Central Australia. Whilst on this traditional Aboriginal land, they were able to learn all about bush tucker, desert survival, navigation and animal tracking were we saw evidence of birds, dingoes, lizards, small marsupials and even camels near our campsites. The boys were also shown how to find and gather their own bush tucker including what has now become a traditional rite of passage in digging up mulga roots to find some succulent witchetty grubs, which the boys consumed raw, much to the absolute delight of their teachers and mates.

The Liddle family are continually in the process of building works on their land and this year our boys were able to lend their muscle to digging a 200 metre trench to house an irrigation hose for their self-sufficient ‘Newington Garden’, where John has planted a variety of heat-tolerant plants including native desert bush ‘tomatoes’. Our boys completed a remarkable number and variety of tasks, which included some plumbing, land clearing, the erection of a metal garden shed and jacking up a shipping container and caravan to place them up off the ground on blocks, so that they could be used as temporary accommodation. The boys took great pride in their accomplishments and John was humbled and quite overwhelmed by how much they accomplished in one full days ‘hard yakka’. Their efforts really made a significant difference for this family community.

Every night we shared our meals with invited local guests, who taught us about Aboriginal culture and history. One of these guests included a famous local artist and Aboriginal Elder from Mutitjulu near Uluru. He shared his knowledge of Aboriginal art, history and stories, told spellbindingly around a roaring campfire in traditional native language with the aid of a skilled translator. A rare privilege for white Australians. This year the boys were also enrolled in a traditional dot painting class led by a local female artist. Boys were challenged to paint ‘their family story’ in traditional Aboriginal style and then share their ‘story with the group upon completion. They really embraced this particular challenge and rose to the occasion producing some meticulous and thoughtful work.

At Hermannsburg, in the heart of AFL territory and we used sport as a ‘bridge’ to interact with the local Aboriginal children. This year we had over 30 local kids of all ages share a game of footie with us in mixed teams, played on the bone dry, brown and dusty Hermannsburg oval. At the conclusion of the game, we distributed a full set of AFL jerseys kindly donated by our AFL affiliates from Sydney University. All the local kids who played that day went home with a treasured memento of our afternoon spent together.

The feedback from the boys about this experience has been all excitingly positive. Many of the boys stated that this was the best school trip that they had ever been on, even surpassing previous overseas tours that some had been on. They all had a great time spent with their mates and experienced the awesome landscape, met some remarkable, inspirational characters and learnt a great deal about Aboriginal culture, history and the current challenges faced by our Indigenous people. It was a real eye-opener and a powerful learning experience that will be offered again to Year 11 boys in 2019 and we hope for years to come. 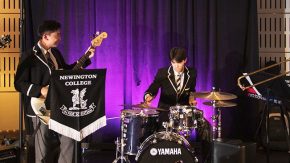