On Sunday 17 February, eight Newington cadets provided a Catafalque Party for the National Servicemen’s Association Ceremony held at Bardia Barracks (now Ingleburn Military Heritage Precinct) to honour and remember the ‘Nashos’ who fought and died while on national service.

The National Servicemen’s Association was made up of men who were conscripted in two schemes between 1951 and 1972. The first between 1951 and 1959 was because of the Korean War and the second between 1965 and 1972 for the wars in Borneo and Vietnam.

The boys volunteered their time for various reasons, some of which are shared below:

I volunteered to be a part of the NCCU’s Catafalque Party and take part in the ceremony as I believe it is incredibly important to show respect for the sacrifices made and the horrors faced by these brave men and women. I think that being a part of a ceremony such as this, really highlights that we are a part of something much bigger than ourselves. – CUO Aaron Hawkes

The Cadet unit as a whole has given me so many fond experiences and memories. I felt like I owed it to them to volunteer for events like these and participate in the unit’s wider activities. I also thoroughly enjoy meeting people at these remembrance services, the stories that people tell at events like these are always so interesting and it’s fantastic to speak with some Australian army veterans. I also felt like I owed it to them as well, as they put their life at risk so that mine would be much more pleasant. – WO2 Nathan Nankivell

I decided to join the Catafalque party because my older brother was a Sentry for the Catafalque Party the year before. I also thought it would be a great opportunity to do something challenging and out of the ordinary while I was at school. – WO2 Joshua Roncolato

I volunteered for the Catafalque Party for the simple reason that I wanted to be apart of this college tradition and the tradition of the cadets. I feel greatly honoured to take part in an event such as honouring National Servicemen, particularly because my grandfather served in the National Service. The act of taking part in a Catafalque Party is not one to be taken lightly and the heavy weight of our fallen heroes weighs heavily on all our shoulders yet this I view as a privilege. Whilst standing in 30 degree heat as we did on 17 February is quite difficult, it pails in comparison to the sacrifices made by the men and women of the Australian Defence Force. The opportunity to take part in a celebration and remembrance of the men and women who served us is one that I take with the upmost respect and gratitude. – CUO Ned Stevens

Participating in a Catafalque Party is an important and sombre responsibility that respects the military traditions of the Newington College Cadet Unit and commemorates those soldiers who gave the ultimate sacrifice. For me, volunteering to take part of this event as a member of the Catafalque Party was an opportunity to show my respect to those in the wider community who suffered through war; such respect is an important aspect of becoming a leader in cadets. – CUO Angus Waldon 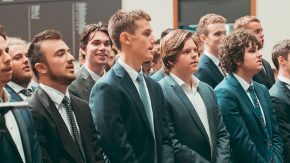 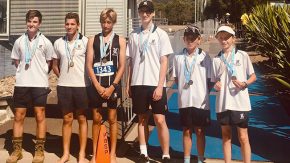