On Thursday 28 February and Friday 1 March the NSW All Schools Triathlon Championships were held at the Penrith Regatta Centre. On Thursday, 12 boys competed in the individual event across three divisions (Juniors, Intermediates and Seniors). On Friday, seven teams competed across the same three divisions.

Congratulations to all the boys that competed individually or as part of a team. For some, this was their first time competing in a triathlon while others previously competed in this event and began training during the summer holidays.

Huge congratulations must go to Nicholas Venetoulis (9/KL), Hugh Harvey (9/MA) and Henry Isherwood (9/MA) who placed 1st in the Juniors and Lucas Pollard (8/MA), Charlie Burt (8/MO) and James Southon (8/LE) who placed 2nd in the Juniors. This is a remarkable achievement for the College and by the boys given over 250 teams took part in that relay alone.

Special mention must go to James Southon and Charlie Burt who competed in both the individual and team events and secondly to Ricky Zheng (12/MO) who competed in the senior individual event. Not only did Ricky finish the race, he also completed the 20km bike leg with a flat tyre for more than 10km. This was an outstanding display of determination and commitment. 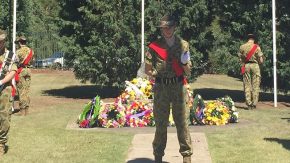