Our Year 7 boys talk about raising money for drought relief

Our Year 7 boys talk about raising money for drought relief

Year 7 boys have adopted drought relief as their charity, and have already proved they have what it takes to make a difference. Their first effort was at Back to Newington Day, and they helped collect donations totalling more than $13,000. We asked our Year 7 boys what it was like to be involved in the fundraising.

It was a fantastic opportunity to go around asking for money for Buy A Bale. Going around asking for money was already a great experience but what made it even greater was the fact that we were doing it for the farmers who are doing it tough right now. It was really enlightening to see when people we have never even met, were willing to donate money to Buy a Bale. Their happiness and generous in giving only made me happier. It is always a good thing to serve the community, no matter where they are and who they are, especially in a hard time. I believe that Saturday was a great success and was a great step to helping the farmers for a better future.

I participated in the Back To Newington Day fundraiser for the Australian farmers. We went around the school collecting money from the people standing around watching the games, and afterwards, I got to see a small amount of the money poured out of the buckets. I felt a huge feeling of joy and pride as I saw the amount of money that had been in just four buckets because I knew that I had helped collect some of it, and that this money would help some of the farmers that are in drought-stricken regions.

This experience was very interesting and I got a lot from it. I felt as if I was giving back to the community. I gave time and effort to help these farmers during this extremely hard time. I hope that what we raised will change lives living through this drought.

It was fun going around collecting money for the Buy a Bale fundraiser and seeing how many people donated and after how much money there was in total.

I found the experience very different to a traditional fundraiser. The idea of going around asking people to donate to Buy a Bale daunted me, but after 30 minutes of doing it, it felt like second nature. I believe it was a great success – I was told by Mr Vass that we raised over $6000 – and I would be happy to volunteer in the future.

I had a great experience running around with my mate collecting money on Back to Newington Day: I liked talking to the rugby supporters and coaches, especially from Kings as they were very generous and gave us a lot of money to support the cause. I assume it’s because lots of them come from farming backgrounds. I loved it and it was a great experience for a great cause. I’m glad we raised so much money. 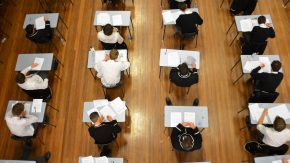 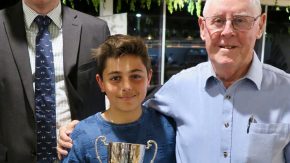 Next Article Seb wins Rookie of the Year
PrintShareShareShare